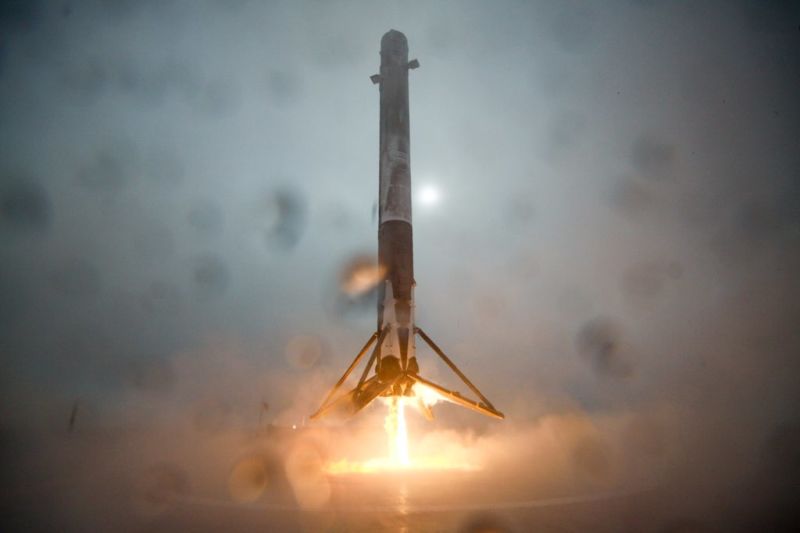 It’s a mostly good day for SpaceX. The company succeeded in its primary mission, delivering the Jason-3 oceanographic satellite into orbit. But its second objective was less successful: Falcon 9’s first stage rocket reached the drone ship, but crashed on landing.

This article was updated as we acquired more information.

SpaceX was streaming the Falcon 9 first stage barge landing attempt when the stream lost signal, leaving everyone with a bit of a cliffhanger as to the rocket’s fate. Worse yet, our on-the-scene reporter was out of service area, engulfed in fog with extremely limited visibility. Even SpaceX officials were uncertain about the stage of the rocket:

When the live stream returned, a SpaceX official noted that the first stage came in “on target,” but landed harder than expected. It was immediately obvious something had gone wrong: Instead of standing upright, the rocket was on its side. Initial suspicions were that it had broken a landing leg strut, although Musk later clarified that instead of breaking the leg lockout didn’t latch properly.

This is the third failed SpaceX attempt at landing a Falcon 9 rocket on a barge, but all for different reasons. The first landing in January 2015 came in too fast, while the second in April 2015 came in with a softer landing but carried too much lateral motion.

As Gizmodo’s very own Maddie Stone noted on twitter, an ocean landing is incredibly hard to accomplish. Musk compares it to landing on an aircraft carrier instead of land, tweeting, “[the barge is a] much smaller target area, that’s also translating & rotating.”

It’s even harder in rough seas. The ocean swells off the coast of California today are far more suitable for surfing than rocket landings with waves 10-13 feet (3-4 meters) high. This was anticipated in the weather forecast, but with conditions good enough for Jason-3 to launch, the company went ahead anyway.

Last month, SpaceX successfully landed a rocket on solid ground. The company is continuing to work at barge landings partly because it’s not yet cleared for ground landings at its Vandenberg location, and partly because barge landings gives SpaceX greater flexibility in recovering rockets with higher launch velocities.

This was the final launch (and landing attempt) for the older-model Falcon 9 rockets. The new Falcon 9 model not only has more thrust, but has stronger legs, which may help with toppling.

Although disappointing, SpaceX is still doing an impressive job reliably reaching the barge. Even Blue Origin’s Jeff Bezos, primary competition for SpaceX in developing rockets that can successfully land after launching, offered his congratulations and optimism going forward:

Meanwhile, the primary mission was looking great. The second stage engine cut off on schedule, leaving the rocket and satellite coasting in an intermediate orbit.

Nearly an hour later, the second stage restarted successfully for a quick burn before deploying the Jason-3 satellite. The satellite lost signal with the ground before confirming that solar arrays had successfully deployed, but JPL heard the good news when they reacquired signal as the satellite passed over Alaska.

Jason-3 will begin powering up instruments in the next few days. That’ll be followed by a months-long period of data verification and cross-calibration before the mission begins scientific operations. It will be providing global ocean topography data every ten days, which is essential both for the long-term monitoring record and for day-to-day ocean operations. Learn more about the satellite and how its data will be used here.

Jason-3 has an expected five-year lifespan. It will be joined by Jason-CS in 2018.

Top image: Pieces of the Falcon 9 rocket returning to shore on its barge. Credit: SpaceX