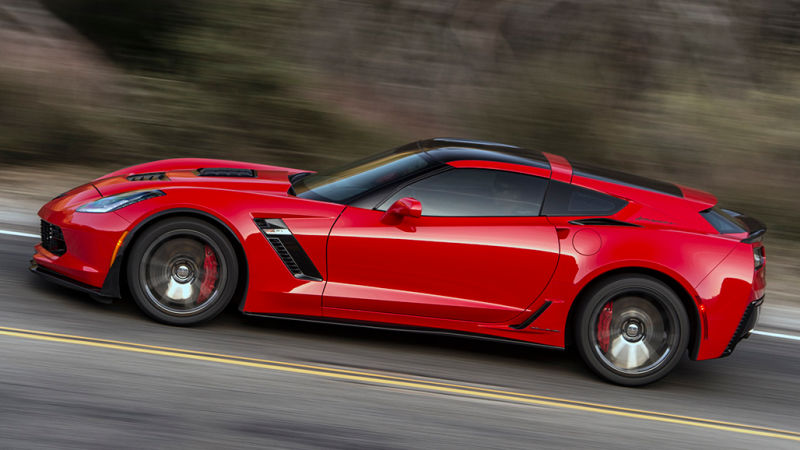 Backing the Callaway Corvette AeroWagen onto the street was like stumbling into a family reunion buck naked. Moms grabbed their kids, grandmas fainted, everybody else ran screaming. “What’s wrong with these dorks,” I snorted. Then I hit the gas and realized the neighbors had every right to be terrified.

Back in 2013, tuning company Callaway Cars promised us that it would soon begin making…

With what I thought was a conservative dose of throttle, the car’s 757-horsepower V8 coughed up a thunderclap. It sounded downright giddy at the chance to put me in my place as it abruptly moved the car–laterally–while its tires screamed in pain and I shrieked in terror.

Thankfully it was not my fate to become a cautionary tale that day, and with a gentle release of the throttle, the AeroWagen regained composure. Me? I took a little longer.

Pulling over to make sure that warm sensation around my hindside was a seat heater and not fresh urine, I went back through the emails Callaway’s PR agency had sent me while sweat dried on my forehead.

Like many of you, I got all excited over the Callaway AeroWagen because it looks weird. Come on, a Corvette shooting brake! Car nerds live for this shit.

I had quickly accepted the invitation to take a closer look, glossing right over the build sheet that described this car as Z06, an extreme variant of the Corvette from the factory, dialed up to 757 HP and 777 lb-ft of torque with a big honking Callaway GenThree supercharger.

The brochure claimed the car could zip from a stop to 60 mph in a downright dangerous 2.8 seconds and lay down a quarter-mile in 10.5. I was starting to find myself a lot less interested in the roof.

But since almost every question readers had about the car was related to its Aero-ness, how much usable cargo space it adds and what it does for rear visibility, I’ll break it down: the AeroWagen’s engorged trunk can carry about four duffle bags, or three sets of golf clubs, or the car’s removable roof and maybe a lunchbox.

It bolts in place of the standard liftgate and uses the OEM mounting points, so there’s no drilling or cutting of your Corvette to install it. For your reference, it’s probably about two big school backpacks worth of space larger than a regular C7 Corvette.

From the driver’s seat, you can still see what’s behind the car. But only directly behind, through a little slit that looks like what I imagine the windshield on a World War II tank to look like. It’s not ideal for parallel parking or backing out of driveways.

Though to be fair, you can’t see much out the front of this car either. The cockpit is so low and the hood is so long that the big spurs of bodywork that slide over the wheel wells act like blinders. At least that leaves you to admire the hole Callaway has sawed out of the hood and the rumbling protrusion of engine that fills it.

Rev the engine at a stop and the sight of that thing quivering is enough to give you goosebumps. Especially if you know how much hell you’re about to unleash on unsuspecting asphalt.

The SC757 does not respect moderation. It has a rawness, an energy I seldom encounter. Remember that it has 50 HP on a Hellcat.

Callaway has been modifying Chevys, specifically Corvettes, for decades. And now a “Callaway Corvette” is more than just a tuner car, it’s almost like a standalone semi-official model. Some of them stand out from standard Corvettes just sitting still- remember the Callaway C12? I had one on a Trapper Keeper in elementary school, it was a complete rebody of the Corvette C5 and a hell of a visual treatment.

And that’s really what the “AeroWagen” part of this car amounts to primarily—a statement piece. For $15,000 Callaway will change out your Corvette’s rear hatch for its own, slightly taller, hatch that I guess can carry slightly more than the standard car. But it’s not going to turn your C7 into a Home Depot hauler.

The ’Wagen’s aerodynamic benefit had not been quantified when I checked in with Callaway’s reps, but I suppose that logic dictates a more gentle rear slope should improve the Corvette’s slipperiness through air.

It does make the car distinctive. At least, to anyone who knows what they’re looking at. And those are the people you really want to impress anyway, right?

Don’t worry, this car snaps necks. Mostly the ones insidethe cockpit, though. The car’s standout feature without a doubt is the organ-crushing acceleration the hurls the car forward, if you’re lucky, and throws in a little side-to-side to make sure you’re paying attention.

I called the car’s build master Pete Callaway after spending a few miles in it. And then a few minutes catching my breath. “Powerful, right?” he said. I had no hesitation agreeing to that. “But easy to control too, right?”

With a nervous laugh, I offered him the same reassurance I gave my friend’s kid when he asked me if fish go to heaven. “Uh, sure man. Why not.”

But besides optimism, Mr. Callaway had some more specifics on the car for me: the specific car I was driving, a 2016 Z06 Coupe with an automatic transmission 3LZ and Z07 performance package, rang up at $108,330 before Callaway got his hands on it. His SC757 package is $17,995, the Callaway Sports Exhaust System was another $2,990, and of course the AeroWagen hatch replacement costs $14,995.

All that put this wicked Corvette creation at $144,310, not counting the wheels and tires it was wearing which Callaway hadn’t priced yet at press time.

That kind of money can buy masterpieces like a Porsche 911 Turbo or a lightly used McLaren. After a short drive, I don’t think this 757-horsepower AeroWagen could hang with either of those cars in a long link of deep turns, but holy guacamole does this thing have swagger.

Other test pilots who’ve driven this car have complained about the automatic transmission, saying it’s too clunky for true performance driving. I couldn’t make myself give a shit because as far as I’m concerned this car has three signature moves: Physically sickening straight-line acceleration, swinging out of parking lots like the rear wheels are the head of a sledgehammer, and making U-turns without using the steering wheel.

These maneuvers are all as riotously fun as they are dangerous and irresponsible.

The car’s not about optimal lap times or hitting apexes. It’s about scaring the pants off your passenger and getting a satisfying little skirrrt when you put the tall pedal down anywhere, anytime, from any speed.

The supercharged Callaway AeroWagen car feels like a raging bull with a score to settle. The only downside is, you’re got to respect the fact that the public roads you’re roaming on have just become your china shop.

This car might be a handful to get around a road course or keep in a lane as you merge aggressively, but it’s absolutely exploding with personality and makes for a more memorable drive than some other cars at this ambitious price.