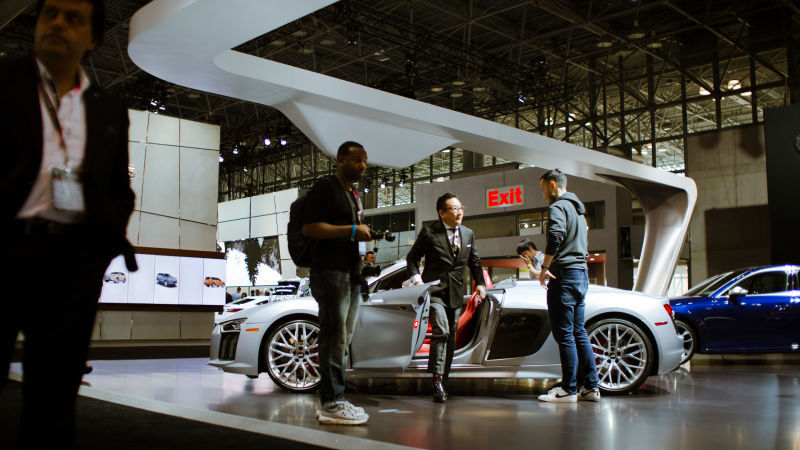 From the outside, attending the press days at an auto shows may seem like fun (to some, anyway.) And while it’s a nice break from all day every day at the office, you have to remember that we’re spending up to two to three days in musty convention centers for you. You, the readers, whom we work so hard to inform.

Unfortunately, us auto journalist people don’t exactly have the reputation of being the, uh, most fashion-conscious bunch. There’s a lot of jeans-and-sportcoat blending, which I don’t see as a problem but Editor-In-Chief Patrick George does. And he knows everything.

We were, however, able to find a few breaths of fresh air. A few gleaming beacons of proof that not all hope is lost. One day, maybe the entire industry will don itself in getups as glorious as these.

This is Kumar Galhotra, the president of Lincoln. While Lincoln’s presence in the luxury car market is questionable, Galhotra’s commitment to a trim, ‘60’s style suit certainly is not.

Here you’ll see Mark Fields, the CEO of Ford, rocking his signature mullet. I know, this isn’t technically an outfit, but I always like to think that great hair can make or break a look. I aspire to be this man.

It’s interesting and fun to follow Fields’ mullet. It was called a “half-hearted mullet” in 2007. It was proclaimed to be a “bear pelt he stole from a passing member of the Queen’s Guard” in 2014. And now it’s 2017. It’s still a tad half-hearted if I’m being honest. And it is textured like the hide of a small aquatic mammal.

It’s hard to tell at this distance how wiry it is, so the next time I’m in the same room as him I’ll run a comb through it and report back. This is vital journalism that the people need.

Here we have an unnamed journalist, leaning over to speak with his neighbor during the Lincoln press conference. If you look closely, there are four (four!) different patterns represented here, on the jacket, the shirt, the tie and the pocket square.

Is this what boldness looks like? Yes, it is, bloggin’ Kristen. Yes, it is.

I have never had the courage to wear colored pants. I think the furthest I’ve strayed from regular blue jeans or black leggings were some pink pants. This man inspires me to do more.

I would also like to add that the jacket he was wearing was metallic as all hell and had a sheen to it. Yellow and gray is a very modern color combination, so this guy has my support.

Purple and checkered, with the top buttons rakishly undone. Is this a custom suit or was this purchased off the rack? We may never know.

A double-breasted, camel three-button suit, complete with a pocket square. We nearly cut ourselves on a look that sharp. In fact, we spotted it from afar and dashed up a set of stairs just to catch it. That briefcase might have even been a prop for all we knew.

This gentleman said he helps organize Ford events. Having been to a few Ford events, all I can say that they are in desperate need of his touch.

A service dog sitting patiently while his people conduct their business. I wonder how that plush carpet feels under his little feet.

And the Best Face award goes to this gentleman, who was taking photos of a Nissan 370Z’s wheels. A perfectly legitimate thing to be doing, especially at an auto show!

Soon after this picture was taken, he scuttled away from view. I like his sweater, though. It looks very cozy and comfy. And that’s definitely something you want to aim for during an auto show because those things drag on and on and you want to maximize your comfort levels.