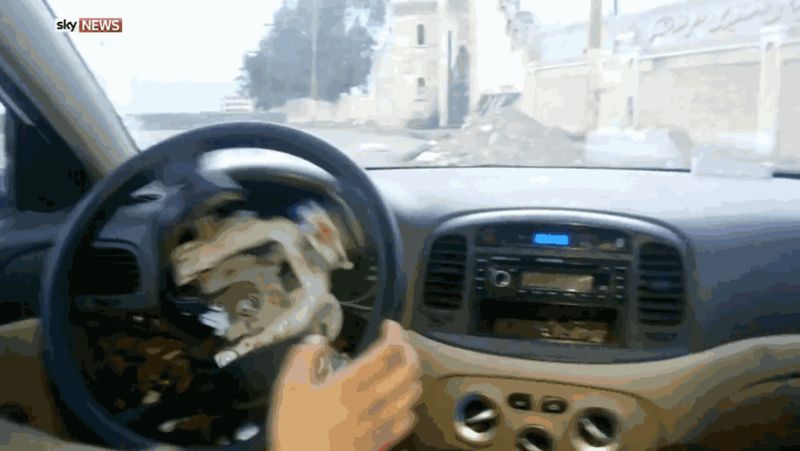 Suicide bombings are a favorite tactic of choice for terrorists the world over. Hamas, the Tamil Tigers, and the Taliban have all used them. The Islamic State has committed plenty of suicide attacks, too, but suicide attacks have an inherent problem – eventually you run out of people willing to commit suicide just to murder others. So the Islamic State has come up with a solution to that.

Britain’s Sky News managed to obtain a hard drive full of IS training videos. Unlike the terrorist group’s propaganda videos, these ones aren’t full of depraved violence, but rather are supposed to educate fighters on how to commit more depraved violence. In one instance, the video shows the technical development gone into creating a remote-control explosive vehicle.

Obviously, the Islamic State aren’t exactly geniuses, so it’s not like they invented the remote control car. Remote control car and truck bombs have been around for years. Google they ain’t either – anyone who tells you that this setup is “autonomous” isn’t being truthful. It still needs someone controlling it, they’re just not in the vehicle itself.

This massive vehicle, believed to be a Belaz dump truck once used to build dams in Syria, was… Read more Read more

The innovation, if you can call it that, is actually in the counter-countermeasures. It’s relatively easy to detect a remote-control car bomb. Just point an infrared camera at every vehicle that approaches a checkpoint – if there’s no one in the driver’s seat, you’re probably going to have a problem, and you then know to destroy the vehicle at long range.

But if you could somehow rig up your remotely controlled car bomb to fool an infrared camera into perceiving that there’s a driver in the vehicle, then the victims might be none the wiser before it’s too late. And to do that, IS got a mannequin.

It’s not just any mannequin, however. It’s been wired up and covered in aluminum foil, so that it gives off a heat signature. To heat-sensing equipment, everything should look fine.

Which is a problem.

But we don’t know for sure yet if IS has put this plan into practice, let alone how effective it would be. And it’s not like the coalition fighting IS is about to say, either, if the remote-control-car-bomb-complete-with-heated-dummy setup would even work, or what it would take to defeat it. That’s the sort of thing most militaries like to prevent their enemies from figuring out.

The training videos show other developments, too, like advances in air-to-air missile technology, stockpiles of explosives, and training methods.

When the Islamic State comes up with a technological innovation, it tends not to be very high-tech. But even then, it’s disconcerting in its ingenuity.