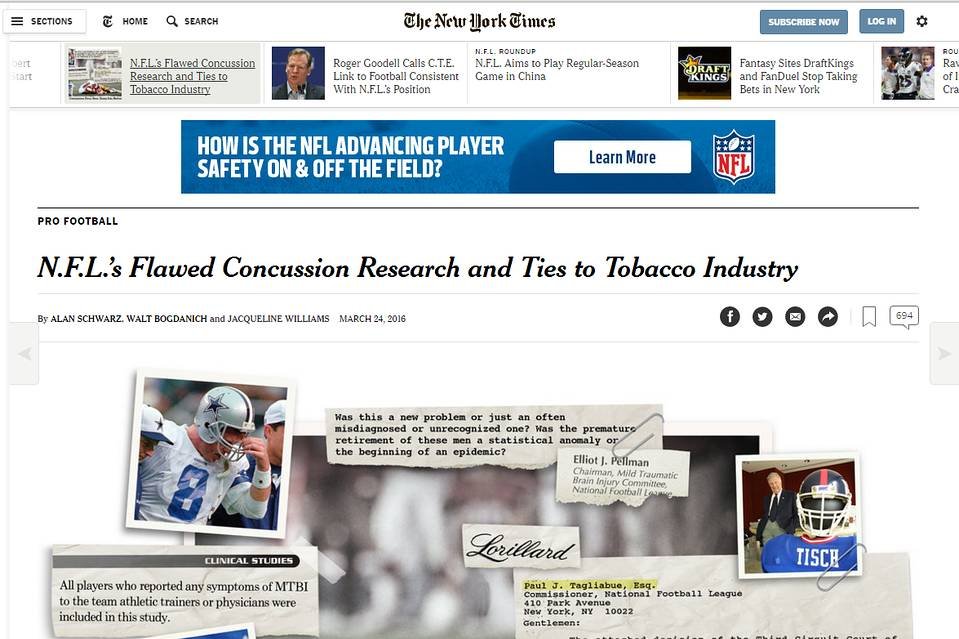 The NFL is waging war against The New York Times over an investigative piece published in The Times last week, entitled “N.F.L.’s Flawed Concussion Research and Ties to the Tobacco Industry”. On Monday, the NFL demanded that The Times retract the piece entirely.

In a letter to The Times’ legal counsel, obtained by POLITICO, NFL attorney Brad Karp issued a “demand that the story immediately be retracted.”

“We also request that the Times’s reporters and editors who worked on this story preserve their notes, correspondence, emails, recordings and work papers and all other electronic and hard copy documents generated or received in connection with their work,” Karp wrote, seemingly cautioning The Times against possible future legal action.

On March 24, The Times published the lengthy investigative story, which linked the NFL to the tobacco industry through a number of lobbyists and lawyers, and also alleged that the league intentionally used incomplete concussion data to downplay the relationship between football and head trauma in five peer-reviewed scientific journal articles.

Of the piece, Karp wrote in his letter: “Its sensational headline notwithstanding, the story did not show any meaningful ‘ties to the tobacco industry.’ Nor did it present a shred of evidence to support its thesis that the NFL intentionally concealed concussion research data.”

Hours after the piece was published, the NFL fired back with a 2,500-word statement on its website, calling the story “pages of innuendo and speculation for a headline with no basis in fact.”

The Times’ sensationalized story is further refuted by the NFL’s ongoing commitment on the issue of player health and safety – notably, to the support of research, including that of our most vocal critics, on the long-term effects of concussions in all sports, and to change our game in an effort to make the sport of football as safe as it can be. We have committed tens of millions of dollars to fund independent research, made 42 changes to our rulebook since 2002 to make the game safer, and have advanced concussion awareness and safer tackling at all levels of the sport. And we provide a host of benefit programs which, together with the proposed settlement of our players’ concussion litigation, will ensure that our retired players are properly cared for in the future.

What’s more, the NFL also bought and ran player safety ads on the story itself, including in the banner directly above the piece’s headline (as first illuminated by The Wall Street Journal).

“We wanted readers to have all the information about all the work that we’ve done to improve the safety of the game,” NFL spokesman Brian McCarthy said of the decision, via The Wall Street Journal. “We were concerned that our message was being mishandled by the Times.”

In a statement (via POLITICO) Stallman said, “Our reporting showed that more than 100 such concussions — including some sustained by star players — were not included in the [NFL’s] data set, resulting in inaccurate findings.” He also noted that a co-owner of the New York Giants has direct ties to the tobacco industry and that “the N.F.L. and the tobacco industry shared lobbyists, lawyers and consultants.”

You can read the NFL’s full letter to The Times here.

NOW WATCH: Pro golfer takes his pants off to hit a shot and learns a funny lesson about product endorsement