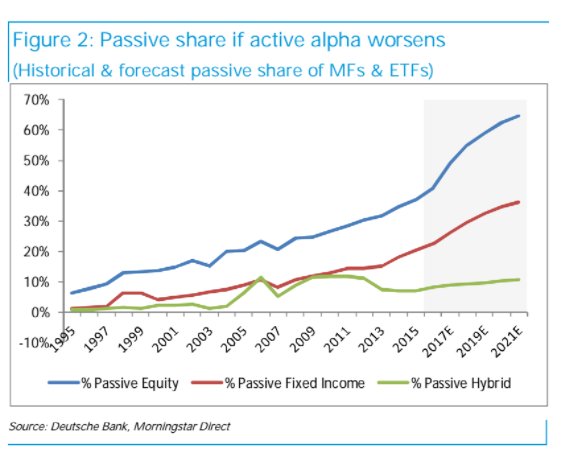 The tide is going out on active managers.

Passive funds, which simply track an index, have hoovered up assets over the past decade. The combined assets of the nation’s ETFs were $2.4 trillion in August, according to ICI.

The seemingly inexorable rise of these types of funds has everyone on Wall Street talking, with some even describing it as “investor socialism.”

And these funds, which are low cost, tax efficient and offer daily liquidity, pose an existential threat to the actively-managed funds industry.

These funds have suffered from poor performance of late, helping speed the shift from actively managed funds to the low cost, tax efficient passive alternatives.

And according to a 240-page study Deutsche Bank released this past week, there really isn’t much active funds can do to stem the flow of assets. All they can do is slow the shift.

“Since indexing was adopted in the 1970s, the debate on the merits of passive vs. active investing has never been so intense. With secular structural product trends favoring ETFs over mutual funds combined with less visible alpha by active managers across many categories, we think passive investing will gain further share until a better equilibrium is reached.”

The equilibrium Deutsche Bank is referring to is the breakdown of assets between active funds and passive funds. Right now, more money is managed in active funds. That could soon change.

Here is a roundup of Deutsche Bank’s major points.

Hybrid and fixed income strategies face a similar hurdle. Even if active investment performance improves, passive’s share will rise from 30% today to about 40% in five years – or 50% if it doesn’t, the report said. Still, Deutsche Bank isn’t worried about an impending death of active management. Nearly 40% of the industry’s assets are in active strategies in which managers are providing superior long-term returns compared to their passive cousins, the report said.

Some of the active firms set for higher growth include Fidelity Investments, T. Rowe Price and JPMorgan, according to Deustche.

What’s more likely in the long term is that investors will increasingly adopt a mix of active and passive strategies, the report said.