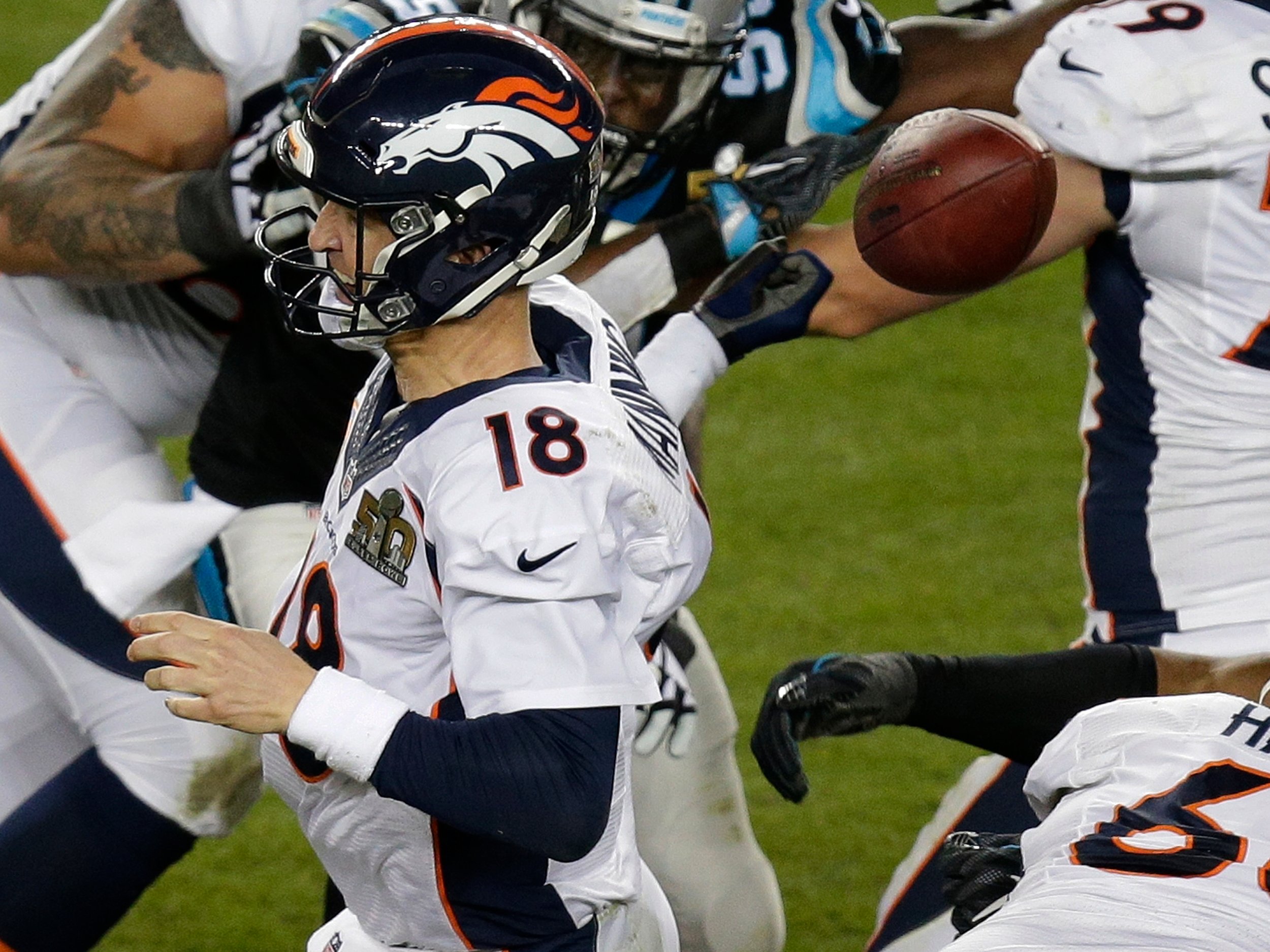 The Super Bowl was terrible.

One team had more turnovers than third-down conversions, gained only 130 total yards after its opening drive, and had just two drives that lasted longer than five plays.

The other team lost — by two touchdowns.

The main storyline after the Denver Broncos’ 24-10 victory over the Carolina Panthers was that Peyton Manning got to exit the field Sunday night, possibly for the final time, as a Papa John-kissing, Budweiser-buying Super Bowl champion. A great potential ending for one of the all-time greatest quarterbacks.

But his performance on the field? It left much to be desired — as can be said for much of Manning’s season.

Trent Dilfer and Brad Johnson, two far-from-legendary quarterbacks, played better in their Super Bowl victories than the Hall of Fame-bound Manning did Sunday. In fact, Cam Newton, the Panthers quarterback who on Sunday lost two fumbles, threw an interception, and completed fewer than half of his passes, was deemed to have an on-par game with Manning.

Sure, this was a battle of the two best defenses in the NFL, and defense wins championships, right? And that’s supposed to be fun and interesting to watch, right?

It isn’t, really. Apologies to the “I appreciate great defense and you’re not a real football fan if you don’t” subset of sports fans. Great defense is fun to watch when it’s your team that has the great defense. If you don’t have a vested interest in either team, well, it’s not very fun. And unless you were clad in orange and blue or an immediate family member of the Panthers’ Kony Ealy, that game was atrocious.

This is why CBS rated the game as the second-worst Super Bowl of the past 20 years and the third-worst of the past 40.

This is actually how almost three-fourths of the game played out: During that stretch, 15 drives accounted for less than 10 yards, and the total yardage from those 15 drives was a paltry 16 yards. The game ended with eight consecutive three-play drives, including the one offensive touchdown for the Broncos, who couldn’t score from within 5 yards until a penalty on Carolina’s Josh Norman gave them a fresh set of downs from the goal line.

Back to Manning. Though the Panthers have a world-class defense, only four quarterbacks were rated worse against Carolina all season, including the playoffs. Ryan Mallett, then of the Houston Texans, and Luke McCown, taking the place of an injured Drew Brees for the New Orleans Saints, fared better against the Panthers defense than Manning did. Matt Ryan of the Atlanta Falcons had a better passer rating against the Panthers when his team was shut out.

Newton, for his part, seemed to be lost after a pass to receiver Jerricho Cotchery that should’ve been ruled complete was deemed an incomplete pass. He fumbled two plays later, and Denver recovered the ball in the end zone for its first score. As the game was winding down, and the teams were separated by less than a touchdown, Newton barely made any effort to pick up another fumble he lost, which led to the Broncos’ other touchdown. CBSPanthers quarterback Cam Newton considering whether to pick up the football he just lost during the fourth quarter Sunday in a one-possession game.

Many took to Twitter during and after the game to express displeasure with the Super Bowl’s entertainment value.

This is a one-score game. Nine min left. And I’m pretty sure it’s a Super Bowl. And somehow it’s boring as hell.

This year’s Super Bowl MVP: Me, for watching this dumpster fire.

So far the Super Bowl is very boring – not nearly as exciting as politics – MAKE AMERICA GREAT AGAIN!

This game will most likely end up being forgotten by the vast majority of the millions who watched. The winning team averaged slightly more than 40 yards a quarter over the game’s final three stanzas — roughly the same as Manning’s age (39).

Not even a puppy monkey baby could make this event palatable.

SEE ALSO:The NFL world is baffled by the crucial play that Cam Newton appeared to give up on