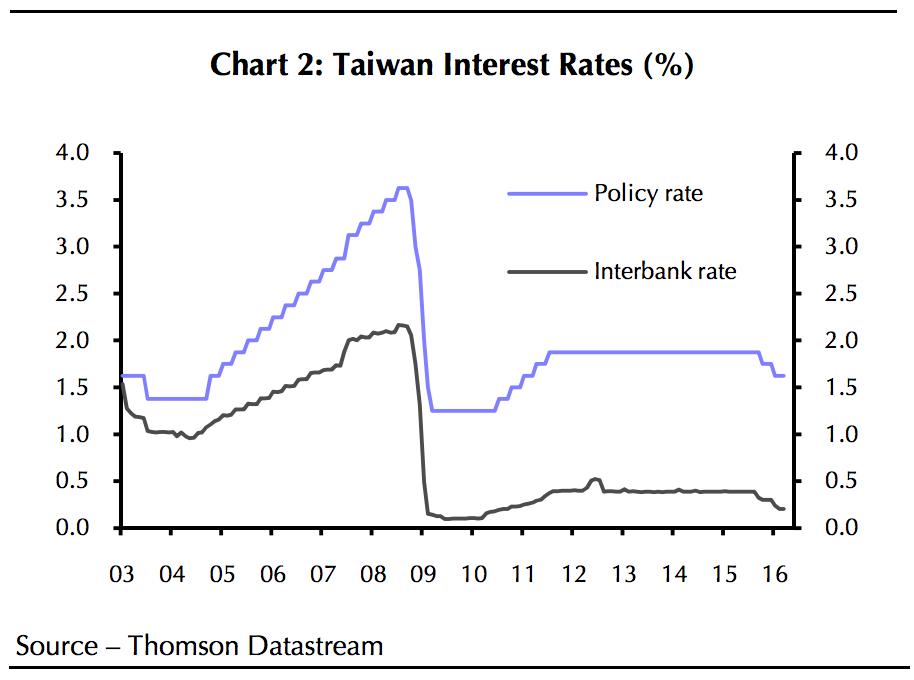 Taiwan slashed rates for the third time in six months on Thursday.

The central bank lowered rates by another 12.5 basis points down to 1.5% from 1.625%, as many economists were expecting.

The cut comes amid weak growth and lower inflationary pressures.

Plus, although inflation rose in February to a three-year high of 2.4% year-over-year, Capital Economics’ senior Asia economist Gareth Leather noted that “this was mostly due to a snap of very cold weather which pushed up the prices of fresh food, and should prove temporary.” “Given the poor outlook, we think the central bank will cut its discount rate again at its next meeting in June,” argued Leather in a note to clients after the bank’s announcement.

“With underlying measures of inflation still very depressed, inflation expectations low, and the output gap widening, worries about inflation are unlikely to prevent the CBC from cutting again.”

Notably, the central bank governor Perng Fai-nan stated in his briefing after the announcement that Taiwan still had some room to use traditional monetary policy to stimulate growth.

However, Leather argued that Taiwan might be “approaching the limits of conventional monetary policy.” As he explained in the note:

“Under such circumstances, the government would ideally be stepping in to loosen fiscal policy. But with debt levels already close to its statutory limit, and president-elect, Tsai Ing-wen, committed to shrinking the budget deficit, the onus will be on the central bank to support growth. Unless the economy starts to stage a recovery soon, the CBC may find itself having to adopt negative interest rates or some other unconventional policy tool, such as an exchange rate target.“

But, again, that all depends on how Taiwan’s economy is going to do going forward.

NOW WATCH: Ancient Romans had perfect teeth because their diets were low in one substance