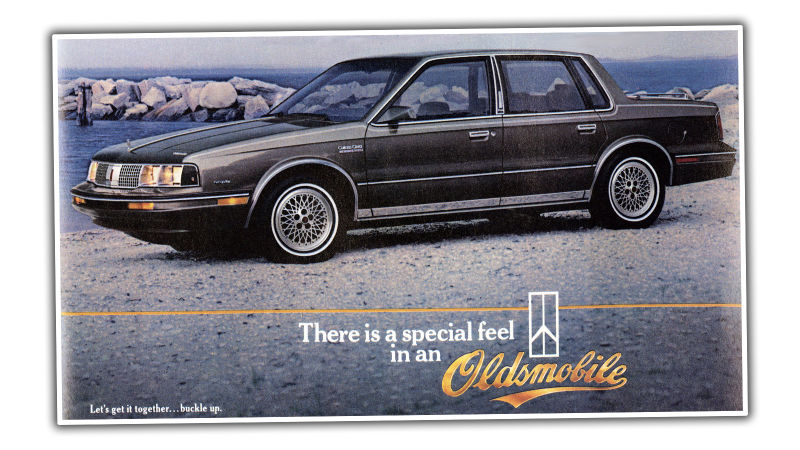 The features of a car that a carmaker, or, more accurately, the ad agency that works for it, chooses to highlight can vary pretty wildly. They can shout insane horsepower numbers or somberly remind you about how safe their cars are, or the novel shapes their seats fold into or how much action you’ll be getting from your preferred gender in their car. I’m pretty sure, though, that no company has ever pushed a car feature as boring as one on this 1985 Oldsmobile Cutlass Ciera.

The Cutlass Ciera was already a deeply, richly boring car, with its shining moment probably being the vehicle that a bullet-grazed and bleeding Steve Buscemi drove in Fargo. Beyond that, you can get a sense of how exciting the Ciera was by carefully reading this ad:

Did you find the Most Boring Car Feature Ever? In case you missed it, or blacked out as your brain shut down from stimuli-starvation, here it is:

Yep, that’s right: an in-dash “auto calculator” you can use to balance your checkbook.

Fuck yeah, right? You can almost picture the scene: in the distance, a low rumble. A 1985 Oldsmobile Cutlass Ciera crests the horizon, headlights blinding in the twilight. It speeds towards you, engine roaring, and comes to a skidding, sideways halt inches from your groin.

The window slides down, revealing a man with thick, luxuriant hair like some genetically-engineered sex-muskrat, wearing a massive, dark pair of aviator sunglasses.

His gaze locked on you, he grabs a worn checkbook from the seat next to him, flips it open to the register section, and then begins to furiously punch buttons on the Ciera’s in-dash auto calculator.

This continues for several minutes.

The man finally drops the checkbook to the floor, turns to you, and looks at you over his glasses. Smitten, you get in the car.

I Did It. I Found The Most Boring Concept Car

The 2014 Oldsmobile Cutlass Is Better Than Ever

Oldsmobile Made A Giant Wagon With Built-In Nintendo In 1990