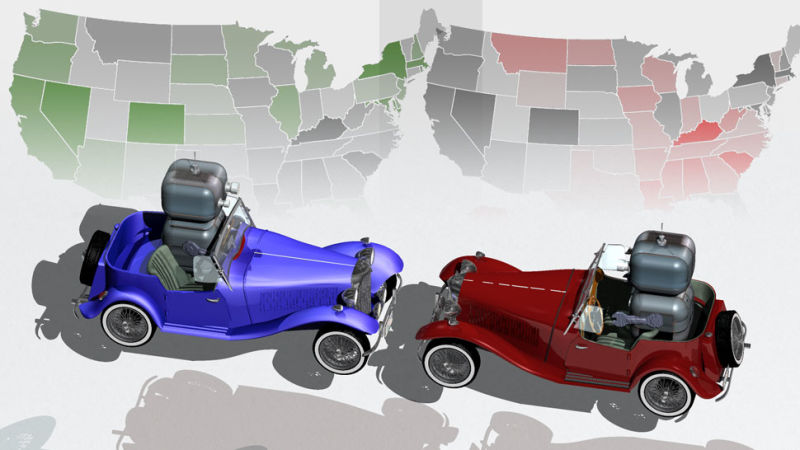 Gearheads.org conducted a survey of over 5,000 drivers consisting of one question:

“On a scale of 1-10, 1 being the least, and 10 being the most, how much would you trust self-driving technology once it hits the market?”

The survey qualified respondents by asking if they were active drivers, and the survey itself utilized Facebook, Survey Monkey, and Mechanical Turk, if that helps.

Here’s how things broke down, in infographic form:

Here’s the five states that were most willing to trust autonomous vehicles, in order of trustitude: Colorado, Nevada, New York, California, and Maryland.

The five states that trusted these sneaky Cylon-cars the least were Kentucky, South Carolina, Louisiana, Alabama, and Mississippi.

For the states most willing to trust, it’s not hard to pick reasons for many of them: Nevada has been at the forefront of autonomous car testing for years, and their large, open desert roads are an ideal testing environment. California has Silicon Valley and many of the companies actually developing this tech, New York has a big city in it full of people who don’t drive anyway, Maryland I’m not sure about, and it’s possible Colorado was high.

For the doubters, it’s notable that all of them are Southern states, and all are in the bottom 10 when ranking how educated its citizens are, though, to be fair, Nevada doesn’t come out so hot there, either.

The divisions are also pretty well divided along liberal/conservative lines as well, with all the top 5 Not Trusters going Republican in the last presidential election, and the top 5 Trusters going Democratic.

It’s not a perfect division among the rest of the states, but it’s pretty damn close to the red/blue divide. So why is this?

Also, why the split in the Dakotas?

I haven’t done a formal study as to why this division would so closely ape America’s main political divide, but we can certainly speculate. This speculation could, of course, be spun to whatever side you’re on to try and claim the better result.

This could likely get nice and heated, if we wanted.

There’s also the urban/rural divide, with congested cities being more receptive to autonomous vehicles, especially for populations less likely to own a car and more likely to use public transport, but then again, I’ve never wanted a robot car more than when I was driving on a long, straight, tedious stretch of nowhere highway in Oklahoma.

Autonomous cars are certainly coming, and I suspect that, in time, they will be commonplace in America. Personal politics aside, I always want the option of driving my own (usually old) car, but I’m not opposed to a robo-chauffeur as well. This division of trust is interesting, and it’s worth further study.

How would you explain this divide?