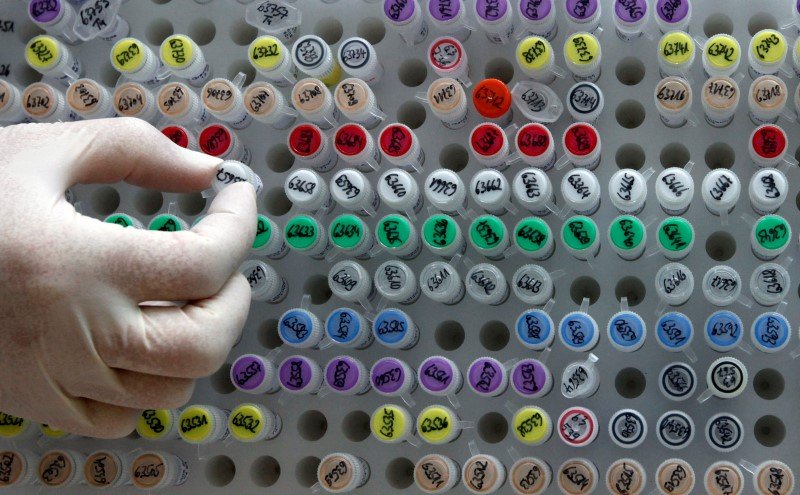 Thomson ReutersHuman genetic material is stored at a laboratory in Munich

One of the world’s biggest industries has yet to face a disruptor like Uber and Airbnb.

At JPMorgan’s annual healthcare conference this month, Business Insider had the chance to sit down with industry leaders and ask them what could disrupt healthcare in the same way.

From gene therapy to robotics, these are their predictions:

The difference between healthcare and already-disrupted industries

Before jumping in, many made it clear that there’s a big factor that stands in the way of truly “disruptive” companies in healthcare.

“Something like an Uber can take off and just explode because there wasn’t a regulatory agency involved,” Genalyte CEO Cary Gunn said.

That’s not the same for healthcare companies especially diagnostic companies like his, which is developing a way to rapidly test for diseases such as rheumatoid arthritis using a single drop of blood. There are a lot of necessary checks that keep ineffective treatments at a minimum. So for example, it might take a new medication about 10 years to get through all the necessary steps toward approval.

Overwhelmingly, the most common answer we heard had to do with genetics, and in particular the gene-editing technology called CRISPR. In fact, some were convinced that the power to sequence genes with companies like Illumina has already disrupted the healthcare industry. ut, with revolutionary technologies, such as CRISPR, the excitement mixed with concerns about still-unanswered questions about gene editing.

CRISPR could be used to cut out faulty, disease-causing pieces of DNA and replace them with healthy ones instead.

“They have the potential to revolutionize how we treat diseases but they have a long way to go,” Braeburn Pharmaceuticals CEO Behshad Sheldon said.

“And we don’t know what happens when you change one gene sequence. … Who knows if three other genes go, ‘Oh no, what happened to that one? Let me go take over its job!'”

Another common theme was how gene sequencing is changing the way we treat diseases — especially cancer.

On the drug development side of things, the hope is to see a huge increase in the number of drugs that are available to treat cancer, said executives from C4 Therapeutics, a new cancer treatment company. That way, there are more options from which to choose for a particular individual, depending on the specific genetic makeup of their disease.

There also needs to be a technology component to decipher all the genetic information and help determine which individual treatment works best.

Sifting through genetic information, is no small feat. For this reason, Andre Choulika, the CEO of Cellectis, a company that is using gene-editing to treat cancer, said the “silent revolution” is in robotics. Back in 1988, when Choulika was doing sequencing by hand, he estimated that the entire human genome wouldn’t be sequenced until 2050. But thanks to technological advancement, it was cracked in 2003.

“What was the revolution behind it? Robotics,” he said. Although revolutionary ways to treat cancer was the hot topic of the week at JPMorgan, some industry leaders recognized the need to look into the viruses and bacteria that often cause us problems.

For starters, having tests that can quickly determine what infection you’re fighting could be a big help in the fight against antibiotic resistance, said Manos Perros, the CEO of Entasis Therapeutics, which is developing antibiotics for tough-to-treat bacterial infections.

“There’s a notion that bacterial pathogens, but also some viral infections are coming closer to our world, and we have virtually at this point no real answer,” said Christian Schetter, the CEO of Rigontec, a German company that’s developing a new way to approach cancer treatment using RNA.

“We should not fool ourselves … we have to deal with it.” Using immunotherapies, which are gaining attention for their cancer-fighting abilities, to fight infectious disease is one way to make that happen, he said.

Gravitating toward a healthcare consumer

Overall, the consensus seemed to be that the true disruptor of the healthcare industry is still to be determined. And it might not just be one revolutionary app, idea, or scientific breakthrough, but rather a change in mindset toward getting the consumer (in this case, the patient) more engaged in their care.

“What it’s going to take from a technology perspective, the Uber, the Snapchat of healthcare, I don’t know what that app looks like,” said Steve Kafka, the president of Foundation Medicine, which uses gene sequencing and data analysis to help treat cancer.

“But … it will ultimately be about putting that information directly into the patient’s hands.”

NEXT:Biotech investor: ‘None of us were as smart as we thought we were’