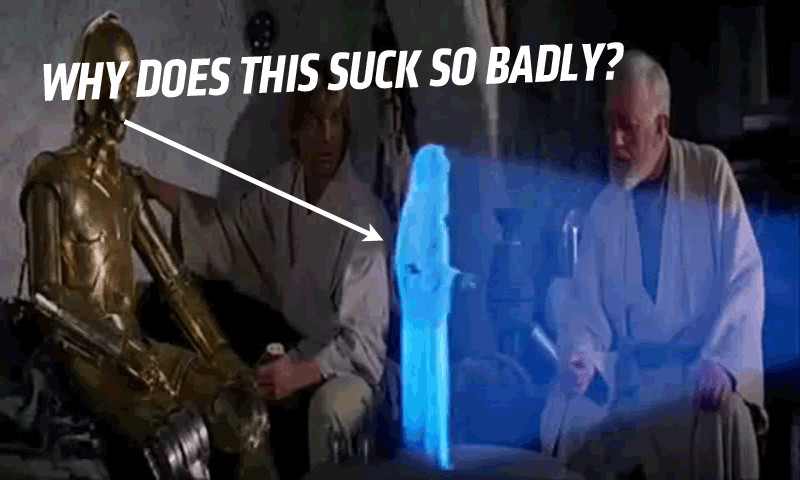 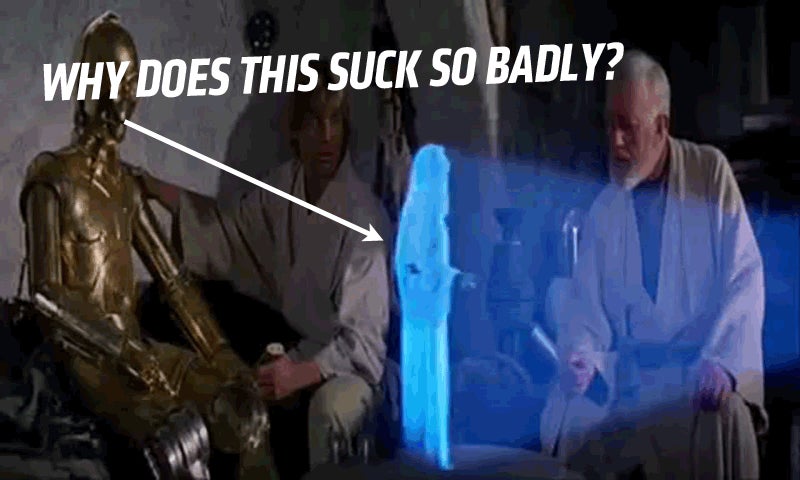 Of all the technological achievements of the Star Wars universe – faster-than-light space travel, antigravity, blue milk – the one that seems most ubiquitous is probably holography. Holographic projectors are all over the place. So why are they so crappy?

Let me clarify a bit: why is the image quality of the vast majority of Star Wars holograms so sucky? Most holograms we see have a heavy bluish cast that washes out any color that may have actually made it into the image, they flicker and distort, they have huge scanlines—they suck.

The image quality is almost exactly like the 1979 12″ Montgomery Ward CRT television I found on a curb off Wilshire Blvd., except with holograms, I could walk around and see how shitty the image quality is from 360° glorious degrees.

The question is, why? The Star Wars universe is filled with incredibly advanced technology that seems to work pretty flawlessly, even in less-than-ideal conditions. Anti-gravity suspensors on beat-up old landspeeders still manage to keep things hovering nice and steady, without jumping and flickering on and off all the time, for example.

The technicians and scientists in that universe have mastered faster-than-light travel and the insanely vast energy requirements of that, and even with all the wear and tear we see, things generally seem to work pretty well.

We’ve seen the sort of abuse an astromech droid like R2-D2 can take, and still get valuable work done while having an essentially-sentient robotic mind – clearly, quality standards mean something important to Industrial Automaton, R2’s maker, so why doesn’t anyone give a shit about the fact that holograms can’t display color as well as a 40 year old Sylvania, or display anything like legible text?

At first I thought maybe it was because of the vast transmission distances involved – holograms seem to be much, much faster than light, so perhaps we can forgive the shitty quality, right?

Wrong. Wrong from the very beginning – the first hologram we see in any of the movies, Leia’s plea to Obi-Wan, is stored locally, on some sort of media, right in R2-D2! It’s not transmitted from anywhere. R2 plays that file from a local data storage whatever, and it suuuuuuucks.

It flickers, there’s a visible top-to-bottom refresh pulse, huge vertical scan lines, the image breaks up into static, the color fidelity is awful – come on. R2 is way too good a droid to be saddled with some half-ass holoprojector/recorder system, right?

How many times has some Imperial commander yelled to a holographic stormtrooper “I CAN’T TELL WHAT THE HELL IT IS YOU’RE SHOWING ME! IT LOOKS LIKE YOU’RE HOLDING A GLOWING BLUE SNAKE EATING A HOAGIE!” I bet lots.

As far as exactly how these holo-projections are transmitted so far, so fast, I have an idea, loosely based in science. Maybe the recording/playback system for SW-universe holograms is like a 3-dimensional CCD: a 3-sided open box made of a grid of light-sensitive cells, and these capture light, via some sort of holographic prismatic lens or something — to store a 3-dimensional array of volumetric pixels — voxels.

Quantum entanglement is, absurdly simplified, when two or more quantum particles share a quantum state, and that state changes as a unit for all the particles, no matter how close or far they are. So, if we pretend quantum state was a color, and we had two red entangled particles, let’s say we have the means to change that quantum state to blue.

If I send the signal to change the state, it would change instantly on both, no matter if they were next to each other on a table, or across the galaxy from one another. That’s insanely simplified, but it gives you the general idea of what this could do.

Many holographic receivers and projectors could be entangled the same way for wide broadcasts, or individual sets or groups could be entangled for private communications. Quantum entanglement seems to be an odd loophole around space-time, so if they somehow have a way to manipulate that, then that could be the basis of how they can communicate so far, so quickly.

Why was this acceptable to everyone? What did the poor bastards who had to sell holoprojection systems do? Or worse, what about the poor bastards who worked in the call centers, and had to deal with irate rich people on Naboo bitching about how they can barely see what the queen is wearing?

This is probably a fruitless exercise, wondering about this shit. No one in the Star Wars universe seems to be able to email anything, either, having to send secret plans and messages and crap via robot and spaceship, so maybe shitty hologram playback is pretty far down on their list of technologies to finally figure out.

As always, I welcome your thoughts. Don’t be afraid to remind me it’s fiction and none of this matters!